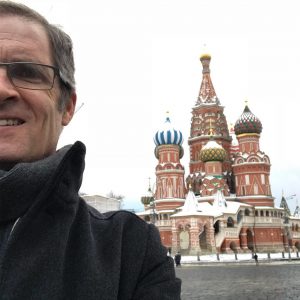 In the fall of 2018, Bryce Traister, Dean of the Faculty of Creative and Critical Studies, was invited to give a series of lectures in Moscow and St Petersburg, on the occasion of the launch of the Russian translation of David Foster Wallace’s 1996 novel, Infinite Jest.

The trip was organized by the Moscow Embassy, Cultural Affairs Division, of the US Department of State. Whose mandate is to bring American artists and academics to Russia to engage Russian citizens with American culture. During his nine day visit, Traister presented a total of twelve lectures on Infinite Jest, on his own work on American Puritanism, and on the American dramatist, Arthur Miller, a favorite in Russia.

We met up with Dean Traister to talk about his research, the trip to Russia and how the trip impacted him.

Tell us about your research.

My research is primarily in the area of colonial American literature and culture, specifically religion. I am interested in how the legacies of Puritanism shaped and continue to shape politics and society in the United States today. I believe you can’t really understand America without understanding its past, and understanding the United States today is an important activity for everyone.

How did this trip change you, or change your perspective?

Wow. So I was a kid in the 70s, growing up in the chilliest phases of the Cold War, thinking that, any minute, the missiles would fly and we would all die in a nuclear fire or of radiation exposure. Russia, or the Soviet Union, was the “evil” agent in that extended national fantasy, and even after the collapse of the Soviet Union and the “opening” again of Russia to the West, I took those memories with me to Russia.

The monuments to Lenin and Stalin are still there; the “wall of Heroes” is still displayed on the mighty Kremlin wall facing Red Square. But this is also the new Russia; their country, while not exactly “open” in the way we think of an open-access country, is curious about the West. Suspicious of it also, in various ways.

I loved interacting with Russians, in person, at cafes, on the subways. There is a kind of grim determination set in the faces of the Moscow subway riders, descending 100s of feet on the longest escalators I’ve ever seen, but there is also a ready wit and humor that came out at different times.

What was the most exciting or fascinating thing that you did while you were in Russia?

Hard to pick only one. I was invited to attend a lecture at Spaso House, the historical residence of the US Ambassador to Russia (whom I met), and I watched a debate erupt between the visiting speaker, a US political scientist talking about the (poor) state of US-Russian relations, and a famous Russian TV news anchor, who got into it over the Russian annexation of Crimea. Geo-Diplomacy right in front of me, while the US Ambassador fed his dogs treats in one of the most famous diplomatic buildings in the country.

The frosty political relationship between the US and Russia (and Canada) affected me directly, as I was told, on leaving Moscow, that I had become a “person of interest” to Russian state security because I entered the US Embassy several times, and visited Spaso House, all of which was tracked by Russian security. I hope that file is closed!

Why was this trip important for your research?

In certain respects, it wasn’t—I am not a specialist in the American postmodern novel. But in another important sense, it confirmed my belief in the importance of bringing our work in the humanities and arts to the world, even if it involves a little risk (and a lot of time).

The Russians were fascinated by my talks about American Puritanism, how it explains so much, not just about the US, but about the resurgent millennial nationalism that the Russian Federation’s current president is advancing very specifically through the Orthodox Church.

As academics, we have much to offer, even when we think we don’t. 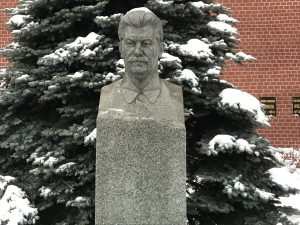 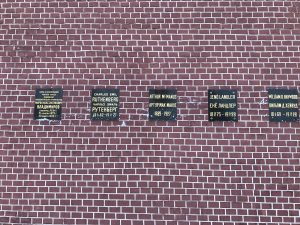