By Shauna Oddleifson on February 7, 2022 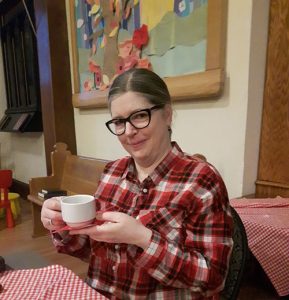 Sara McDonald at the Ponderosa Spinners and Weavers show, November 2019

Sara McDonald, artist and passionate advocate for social justice, died on February 1, 2022.  Sara had a long association with UBC Okanagan, and especially the Faculty of Creative and Critical Studies, where she completed her BFA in 2000, majoring in printmaking, painting, drawing and mixed-media.  In 2011 she completed her Master of Arts (Interdisciplinary) with a thesis entitled Adults with intellectual disabilities and the visual arts: “It’s Not Art Therapy!”. Her two UBC degrees reflect and knit together two of the driving forces of her life: advocacy for contemporary art and artists, and advocacy for those with intellectual and developmental disabilities, a group which has long been marginalized in societies around the world.

Sara grew up in Maple Ridge but moved to the Okanagan thirty years ago and raised her four children, Nathan, Jordan, Rachel and Elisabeth Lige. In 2003, realising that her son Jordan, a talented artist who has a learning disability, would no longer have access to the type of art education he had in  high school, and that there was nothing available in the community, Sara formed Cool Arts, the first supported studio in the B.C. Interior. Over the past nearly two decades it has offered classes to many artists with intellectual disabilities, using professional artists in a professional studio setting. As Sara constantly reminded people, Cool Arts firmly rejects the medical/therapeutic model that suggests people be cured or treated for what are now called neurodiversabilities; rather, each artist is encouraged to develop their own body of work, much as they do in an academic studio setting. Cool Arts burst onto the Kelowna art scene in late 2009 with the exhibition We Are Artists at the Kelowna Art Gallery and since then they have exhibited widely.

Sara was an artist, a gardener, a reader, a maker of beautiful things large and small. She offered sage advice and unflinching honesty, often at the same time. And she made things happen. She fearlessly took on politicians at all levels of government, bluntly pointing out flaws in their policies and then suggesting how those flaws could be remedied. ALS presented her with enormous challenges when she was diagnosed a little over two years ago and she tackled them with her usual candour and energy:  she advocated for increased funding for ALS research in B.C.; she charted her experiences in a blog that offered her many friends a way of emotionally accompanying her through the stages of a relentless disease that stole so much from her; and when it was clear that end of life decisions had to be made, she lobbied the then-Federal Health Minister, Patty Hajdu, to grant her an exemption to use Psilocybin, illegal in Canada since 1974, for therapeutic purposes. She was the first ALS patient in Canada to be granted an exemption, and with her typical sense of mischief, she sent emails headed “I’m going on a trip!”. They were followed by a serious, informative op-ed in the Vancouver Sun on August 31, 2021.

A heron flew by

As the sun crept over the frozen surface