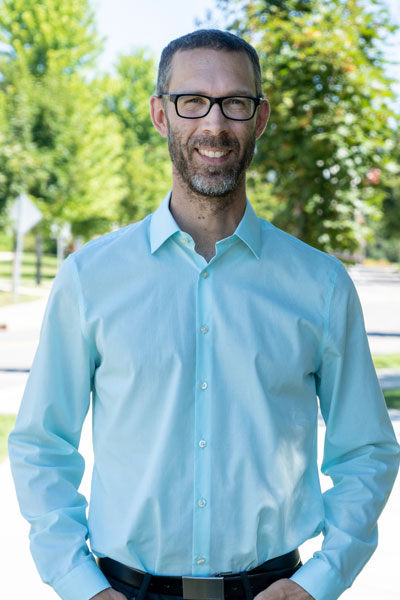 George grew up as a punk kid in southern Ontario who could not be happier living in the Okanagan desert. He can often be found in the mountains with friends and family and a Carolina Dog named Charlie nearby.

While my research and teaching interests are diverse, they are united by a consistent interest in how culture mediates social existence and recognizes or fails to recognize the social relations that structure life, thereby making and unmaking our ethical responsibilities to one another and to sociability as such. This can take the form of arguing for the central importance of public pedagogy as a force that unites punk subcultures and forms the basis of a community that is much more than a collection of deviant or defiant individuals. Or it can involve understanding the social life of biometrics that condition recognitions of identity and individualism as if one were distinct from all others and which may produce forms of ethical irresponsibility and abandonment. Or it can mean exploring how health and illness are social as much as individual determinations that remind us that well-being is a category that often functions to make some states of being more or less livable based on normative assumptions established and reiterated in culture, including, for example, what it means to be seen to be sick, or disabled, or living with a particular condition, or in need of care, as if we are not all living with minds and bodies subject to degradation and unexpected alterations and as if we are not all relying on assistance from others.

My newest research is a consideration of DIY punk culture as an instance of informal public pedagogy. The remarkable heterogeneity of punk is held together not by music, dress, or even radical beliefs and practices, but by acts of teaching and shared pedagogical ambitions. This approach shifts cultural assumptions about punk and contends that it needs to be understood as an instance of and a reflection upon the pedagogical power of culture.

In The Social Life of Biometrics, I explore the cultural meanings and implications of biometrics, which I understand to be more than just a mode of identity verification; it is a mode of thought that has preoccupied cultures in the West particularly for more than 200 years. At a time when seeing the faces of a tiny minority of Muslim women who wear the niqab has become a priority for some Western democracies, and at a time when fantasies of moral openness transform the face into an expression that might lie or tell the truth of who one really is, and at a moment when conflict and economic abandonment have made migration a matter of survival for so many more the world over, this book asks, how have biometric technologies established conventions that shape what can be seen in the face of another?

My past research investigates a cultural genealogy of the war on terror in English responses to Robespierre’s reign of terror. Focused on the emergence of a culture of biometrics – or technologies designed to make individuals legible – I consider how efforts to police homeland security support the prejudicial idea that the human can be parsed into the more and the less human by examining accounts of suicide violence, preoccupations with the eastern veil, the pseudoscience of physiognomy, and more, in novels, poetry, visual culture, drama, travel writing, politics, and philosophy. This SSHRC-funded research has appeared in a number of journals, conference presentations, and an associated website of public scholarship entitled Romanticism and the War on Terror.

This attention to the body as a locus of social anxieties builds upon my previous research into the curious centrality of hypochondria in the culture, science, and philosophy of the Romantic era. The Age of Hypochondria: Interpreting Romantic Health and Illness (2010) examines how culture and medicine mutually regulate and normalize what counts as sickness and health and the morality that is attached to both. In 2011, I received the international Gustave O. Arlt Award in the Humanities in recognition of this book, the first scholar from a Canadian university to receive this prestigious award.

2010 – 2011, SSHRC Standard Research Grant: Romanticism, Terror, and the Limits of the National Imaginary

2009 – 2011, UBC Hampton Fund: Romanticism, Physiognomy, and the Emergence of a Culture of Biometrics

2009, UBC Internal Research Award: Support for Publication Grant – Creating an Index for The Age of Hypochondria

2016, Nomination: Researcher of Year, Faculty of Creative and Critical Studies

Association of Canadian College and University Teachers of English (ACCUTE)

Brian Kerr-Bassett, M.A. English Independent Research Paper, “Life and Death Writing: A Reparative Reading of Tennessee Williams’ Memoirs, and David Wojnarowicz’s In the Shadow of the American Dream: The Diaries of David Wojnarowicz.”

Lindsay Balfour, IGS Ph.D. Dissertation, 2015: “Strangers at the Gate: Hospitality in a Time of Terror.”
Dr. Balfour was a SSHRC CGS PhD Scholarship recipient from 2011-2014 and the inaugural Mellon Postdoctoral Fellow at the 9/11 Memorial and Museum in New York City. She is presently Assistant Professor in the Research Centre in Postdigital Cultures at Coventry University.

Ms. Rajabi Paak was the 2014 recipient of the Henderson Award for graduate research in international health.  She is presently a PhD candidate at York University.

Taylor Scanlon, M.A. IGS Thesis, 2013: “Opening Cages And Ending The World: The Representation Of Animal Activism-As-Terrorism In Bold Native And 28 Days Later.”
Ms. Scanlon held a SSHRC CGS Bombardier MA Scholarship in 2011 and is pursuing a PhD at the University of Alberta on full scholarship.

Jannik Eikenaar, M.A. English Independent Research Paper, 2009: “Locating India: Uncertain People and Places in Salman Rushdie’s Shalimar the Clown.”
Dr. Eikenaar completed a PhD at UBC, Okanagan campus, where he was a SSHRC Doctoral Fellowship recipient, and is now a tenure-track faculty member teaching communications in the School of Engineering.

The Discourse of Terror in Letters on a Regicide Peace and The Bush Doctrine.”