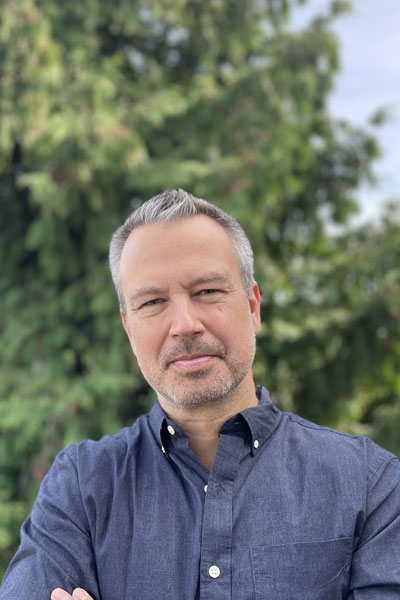 My personal interests revolve around spending time with my family (my wife and three children), a love and pursuit of antiquarian books, and the craft of brewing beer (all-grain). I am Norwegian on my mother’s side and was raised on the Northern coast of British Columbia; accordingly, I love the oceanside, large bodies of water, and open-faced sandwiches. I think volleyball is nearly the perfect sport, and I have a fading dream that one day I will be a competent golfer.

A perfect holiday for me involves the discovery of a used bookstore (more labyrinth than store) where I can dig through small mountains of books to discover forsaken gems. I think animals are wonderful: I feel a close kinship with the donkey and the resolve and determination of the dung beetle inspire me.

My present project is a re-evaluation of Thomas Goodwin’s conversion narrative which was stitched together and published posthumously by his son. Goodwin was a major figure in the intellectual and spiritual life of Stuart England, both as a president of Magdalen College, Oxford, and as a theologian of international repute. His memoirs, however, were imperfectly assembled by his editors and the subsequent readings and interpretations have been confused. My aim is to provide a stronger, clearer reading of this text to render a better portrait of Goodwin as a religious writer and thinker, drawing attention especially to a habit of mind that was notably contemplative and charitable. In connection with this, I am also working on an article that highlights Goodwin’s place within the intellectualist tradition, seeking to locate him accurately within the intellectualist/voluntarist debate that the Reformation period inherited from patristic and scholastic writers. In particular, I aim to correct interpretations of Goodwin that have unfairly attributed too much weight to his ostensibly voluntaristic language. Recently, I have also begun to look at the way that centrist, conformist writers in the Puritan tradition contribute to the religious literature of the seventeenth century as expressions of Reformed Catholicism, taking into consideration, among other things, their high sacramental theology received from sixteenth century Continental divines. Bishop Joseph Hall, Bishop Edward Reynolds, and Daniel Waterland are the writers that I have chiefly in view.

“Big Medicine and Strong Magic: John Bradford and Thomas Watson on the Doctrine of the Lord’s Supper.” Between the Lectern and the Pulpit: Essays in Honour of Victor A. Shepherd. Ed. Rob Clements and Dennis Ngien. Vancouver: Regent College Publishing, 2014.