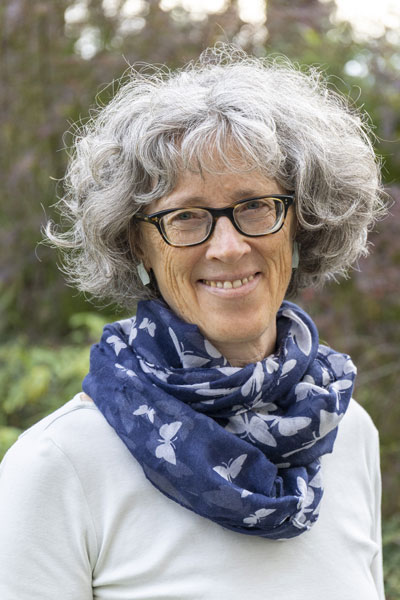 All levels of Creative Writing, from first year to graduate workshops; particularly Power of Metaphor; Community Learning; interdisciplinary graduate courses, advanced poetry workshops. She will not be accepting graduate students in 2022 or 2023.

Nancy Holmes has published five collections of poetry, most recently, The Flicker Tree: Okanagan Poems (Ronsdale Press, 2012), a collection of poems about the place, people, plants and animals of the Okanagan valley in the southern interior of British Columbia.  She is also the editor of Open Wide a Wilderness: Canadian Nature Poems (Wilfrid Laurier University Press, 2009).  With her colleague Denise Kenney in Interdisciplinary Performance, she worked on several initiatives of the Eco Art Incubator, a large scale research project  federally funded  by SSHRC (Canada’s Social Science and Humanities Research Council .  She has just completed work on another  SSHRC funded project with research partner Dr. Cameron Cartiere of Emily Carr University of Art + Design called Border Free Bees which harnessed the power of art to raise awareness and to develop initiatives to protect native pollinators, especially bees, in both the lower mainland of British Columbia and the Okanagan.   Nancy has been both Head of the Department of Creative Studies and the Associate Dean of Research and Graduate Studies in the Faculty of Creative and Critical Studies at UBC.

Place, community, and artistic collaboration have become her latest interests, joining her commitment to the writing and teaching of poetry and fiction. Over the past few years, she has become increasingly active in eco-themed community-based art projects with her students and other artists.

Mar 2018 – Jun 2018 “The Kelowna Bee Ambassador Project”- a community art project to sign up over 200 citizens to become Bee Ambassadors in Kelowna and “The Bee Ambassador Sessions” two workshops on Bee ID and the art of photographing small things.

Jan 2017 – Aug 2017 “The Kelowna Nectar Trail”- a community art project to create a 7.4 km series of flowery footsteps for native bees in south Mission area of Kelowna and “The Nectar Trail Sessions” four workshops on planting for native bees and launching the project’s Bee ID app.

Jan 2016- present “The Public Art Pollinator Pasture”- a meadow planting and art project with the City of Kelowna and multiple community partners, including a community curriculum development for planting.

Apr 2013- Apr 2015 “Dig Your Neighbourhood.” A large student/ community art project- 37 artworks created by student writers and artists with works delivered to the Welcome Wagon for delivery to newcomers to Kelowna neighbourhoods. Facilitated and produced by Nancy Holmes.

Jul 2013 – Aug 2014 “The Yellow School House Project.” A community art project with over 40 local artists) Workshops facilitated by and exhibition curated and produced by Nancy Holmes and Denise Kenney (50% each). The Peachland Community Art Council gallery, Beach Avenue, Peachland BC.

Down to the Golden Chersonese: Victorian Lady Travellers. Victoria BC: Sono Nis, 1991. 114 pages.

Member:  Association of Literature, Environment and Culture in Canada;  and UBC Research Institutes BRAES and ICER

* Nancy Holmes will not be accepting graduate students in 2022