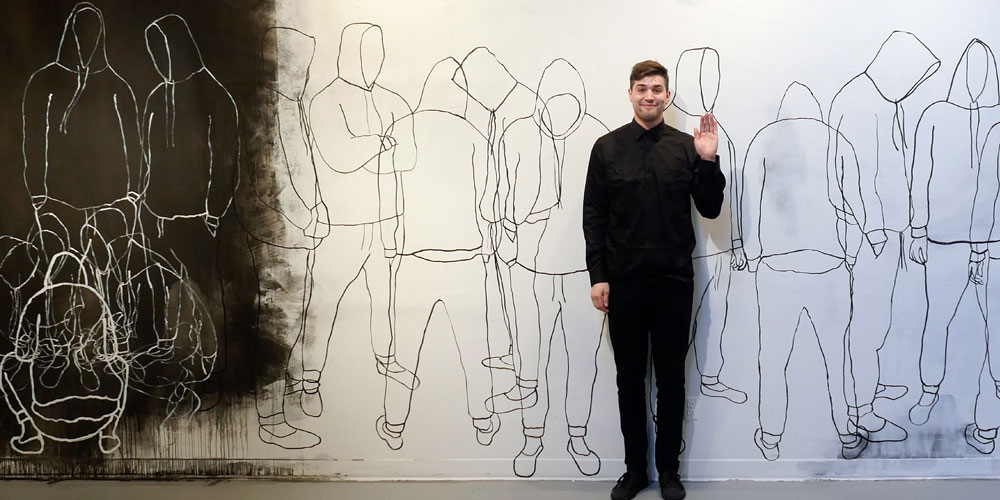 Tyler Dellebuur with his final work for the 2017 year end exhibition, Do Not Erase

The end goal for Tyler Dellebuur was always a career in architecture. After graduating from high school, he started in the Civil Engineering program at Okanagan College, noting that being close to home and the small class sizes were what he needed at that age.

His first couple of years there did not go as planned, and he found himself needing to take a break from school. After four months away, he returned to general studies, taking courses in philosophy and creative writing. This is where he met his first “mentor”, Creative Writing professor, Jake Kennedy.

“Jake introduced me to a lot of different styles of poetry, art, and the avant-garde. That’s when I decided to apply to the Fine Arts program. It was a way to get me to architecture.”

This path was better suited for his interests, and he was accepted into the BFA program in 2013. Once in the program, he wanted to be a realist drawer, so spent his first year really working on those techniques.

“By time second year came around I began to get pulled more towards ‘weirder’ art making.” He notes.

He took painting and drawing classes, working more in an abstract manner, and became more interested in composition and narrative. He also spent some time in the print studio to check out the projects his fellow students were working on, and decided that this was the place for him.

“Just the feeling of walking through the print studio doors is an experience in itself, every single time. It’s so up lifting. So, I took screen printing and that’s where I met Briar [Craig], and as they say, the rest is history.”

Tyler invested much of his time in just being in the print studio and working and producing art to understand where his niche in the “art world” was.

“I was interested in how people who viewed art responded to it, rather than what my reasoning was.”

He became interested in Dadaism and how it related to the present world. He says that Briar helped steer him through those waters by introducing him to artists or theorists who would influence him and my work.

“Briar was less of a professor and more of a mentor to me. He was always around if you needed him, he would also always bring you up if you were having a rough go, or if your ideas weren’t working out how you envisioned them. He would always find light in everything and direct you into what steps you can take next.”

He says that Briar made making art fun; he promoted just getting into the studio and working on something you enjoy and having fun.

“One of the things that really impressed me about Tyler was that while he had a fairly singular end focus, he was also thoroughly open to trying new things and seeing what he could glean from new material, creative and expressive experiences.” Says Briar.

He also said that Tyler was a terrific and fun personality to have around the studio – perpetually supportive, and energetic and always bringing an unexpected point of view to the studio environment.

“Everyone always asks you what you wanted to be when you grow up and being an architect was the first thing I really clung to. And UBC was always the school on my radar to go to.”

He figured out that being an architect was what he wanted to do while taking a class in high school designing battle bots and realized how much he enjoyed the design aspects of those projects.

Tyler just completed his second year of the Masters of Architecture program at UBC in Vancouver. He spent the first two years of this degree completing his course work and doing the initial research for his thesis, which he will start in the fall.

From the very first time they met, Briar notes that Tyler made it clear that his ultimate intention was to complete the BFA program and then get into architecture.

“He increasingly made work that highlighted his interest in spaces and structural arrangements of form and, in the end, he put together a really strong portfolio of work addressing those interests.” Says Craig.

He took an extra year after graduating with his BFA to just work in the print studio and produce work that he was happy with, and thought was strong enough to be considered for an architecture portfolio. He compiled all the work he had created that was relatable to architecture due to its composition, scale, relationship to space and forms, and the conceptual process.

“I think fine arts has been more valuable to me than any other degree would have been to get me into architecture.”

The fine arts program fostered his ability to think conceptually and explore ideas through multiple different mediums. Being able to produce creative work allows a person to push a project even further through how you represent it, he explains.

“The ability to iterate through a concept on multiple levels is incredibly important to me. Simply sketching through ideas is a way to avoid creative pitfalls.”

You can see more about Tyler and his art work on his web site, www.thegianthouse.com. 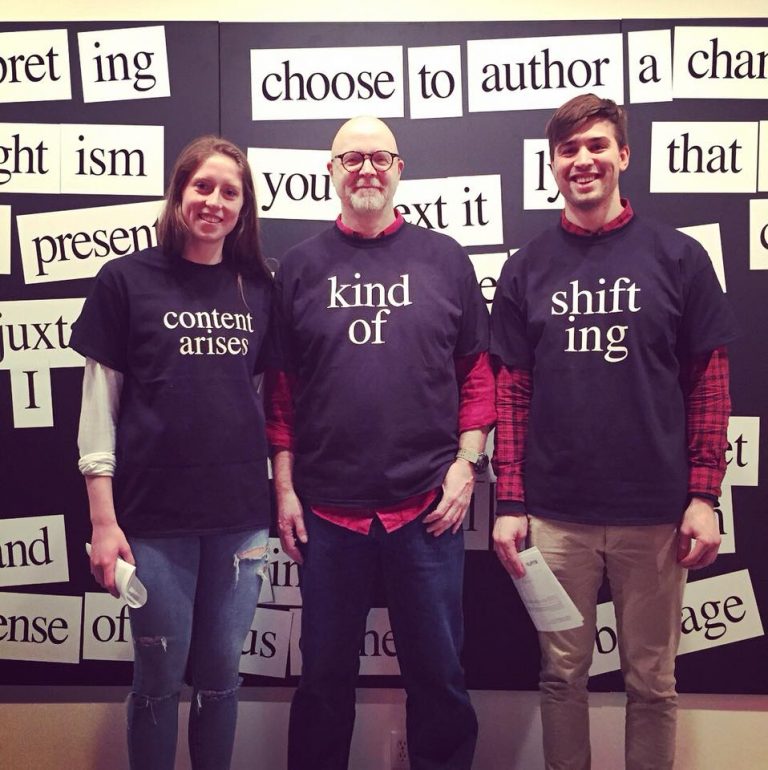 Posted in Creative Studies, Our Students