For bonus marks, near the end of term students in a first year Art History and Visual Cultures course were invited to submit a Getty Challenge according to Getty rules: pick a favourite museum artwork, and find three things lying around the house and use them to recreate the artwork.

Submissions were shared via Canvas, Discussion Board – students could both see and comment on each other’s submissions, and at the beginning of each online class they looked at the latest additions.

“I was not hard on students who bent the rules with more than three “things,” strayed outside of the temporal frame of the course, or even added a bit of Photoshop. What mattered was that they took up the challenge to look closely at art, and had fun interacting with each other in the midst of an online term in which many students can only virtually meet.” Says course instructor, Nathalie Hager.

She adds, “For me, too, this was a real treat: ARTH 101 is a large class and I have been able to get to know only a few dozen of students via one-on-one Zoom, this is the first time I am ‘seeing’ my more shy students as they take a risk having fun and being creative with art from around the world.”

Courtney Kneale was the first to submit – a close recreation of Frida Kahlo’s Self Portrait with Monkey. She wrote: “Attached is my Getty challenge! I know you were going to discuss it on Wednesday, however, I just thought it was so fun I got right on it. My fiancé and I have been howling laughing all day doing this, it was such a nice creative mental break. Shoutout to my little kitty Apollo for playing the role of Frida’s monkey friend.” 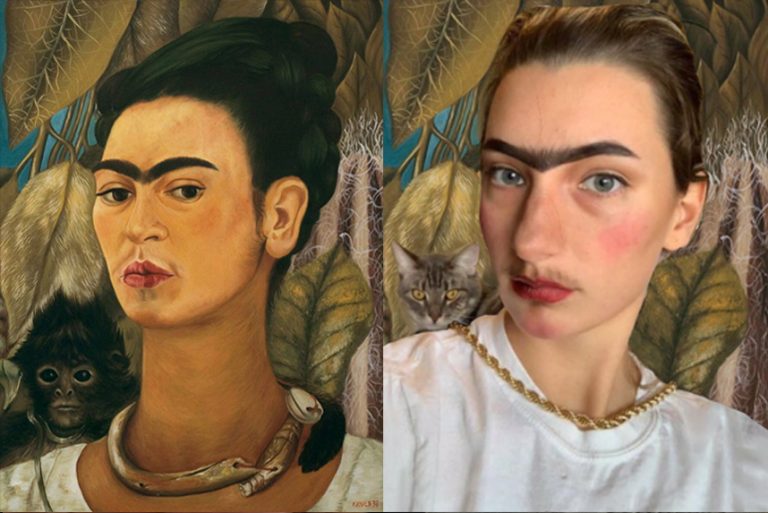 Another student, Lily Robinson, wrote of her recreation of Queen Nefertari Playing Senet: “I hope you like it because my dad came home early when I was doing this, looked at me, looked at our kitchenware stuck to the wall and just let out the biggest sigh- haha oh well.” 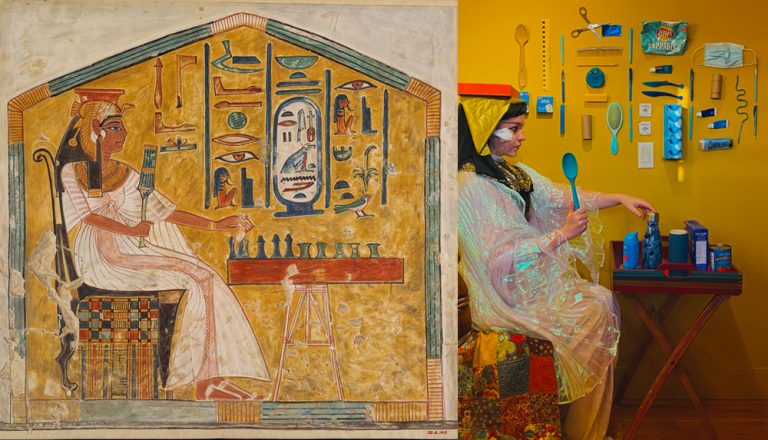 For her inspiration, Olivia Heczko picked Seated Buddha from Gandhara: “I put my own twist on it though relating to myself as a student. My Dharmachakra is a Starbucks logo because coffee gives me energy so I can work and “enlighten” myself through my courses. I hold my phone close to me because with online learning it is an escape. The Buddha has a bhindi but mine is a pimple representing stress acne.” 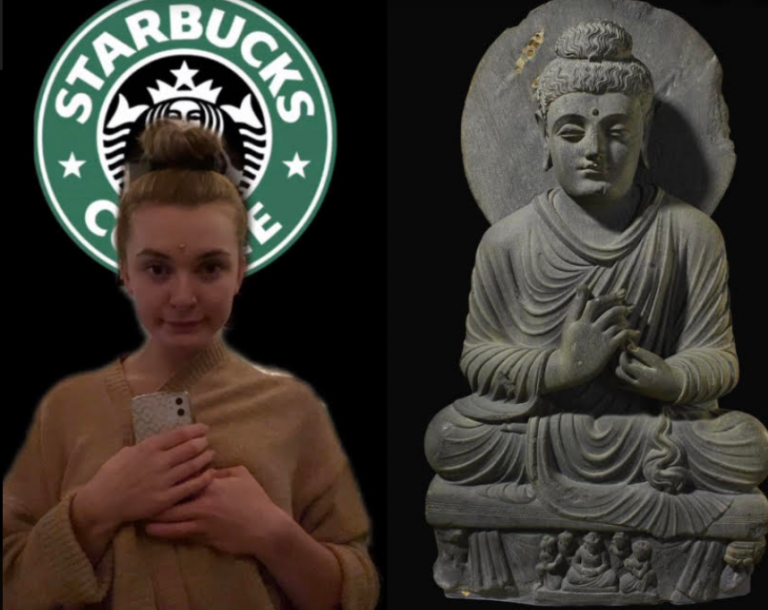 ARTH 101 is a first-year, introductory survey to the history of art. But rather than tackle this history by culture, one chronological period after another in a straight line, students learn about art from prehistory to the early modern period in a World Art Historical way: by focusing on the development, diversity, and interaction of art and cultural traditions, and by emphasising comparisons across various world regions as a reflection of differing cultural perspectives. Organized by era – beginning with Global Prehistory, and tracing networks of connection and exchange as art and visual culture becomes increasingly interconnected via trade and encounter across cities, states, and giant empires and major religions – the course allows students to practice and hone the essential skills of visual, contextual, and comparative analysis using specialized art historical vocabulary, terminology, and concepts. Upon completion of the course students are able to identify key visual works from across the world’s diverse cultures, histories, and heritages, and demonstrate an in-depth understanding of their links and connections across major world regions and across time.

This new approach to the learning art history has been picked up by students in their submissions where they can take their Getty Challenge to any part of the world that interests them: Robin Rajmoolie recreated Kali dancing on Shiva from India. This is not an easy work to set up and photograph, especially considering all the “extra” limbs. 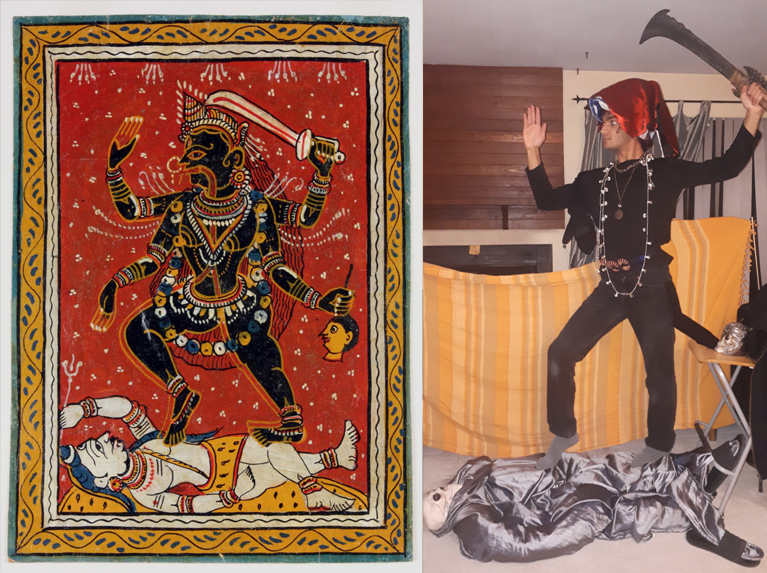 Other students enlisted the help of family (Nikkala Niro’s niece in her recreation of Berlinghiero’s Madonna and Child) and even pets (Loran Evans’ Pomeranian “Leo” in Raphael, Small Cowper Madonna) to create their challenges. Kaitlyn Roth enjoyed a good “howl” with her mom in recreating her version of Portrait of Barbara Van Beck: “we laughed so hard at this.. enjoy haha…feat: toilet paper, Christmas balls and ponytails, haha.”

“I can’t tell you how delighted I was to receive these messages from quarantining students – to know that the Challenge allowed them to blow off some steam, and laugh at themselves while looking and thinking about art in a global context.” Says Hager.

Hager will repeat this challenge to her students next term in part two of the course, ARTH 102, where they will study Era 5: The Emergence of the First Global Age. 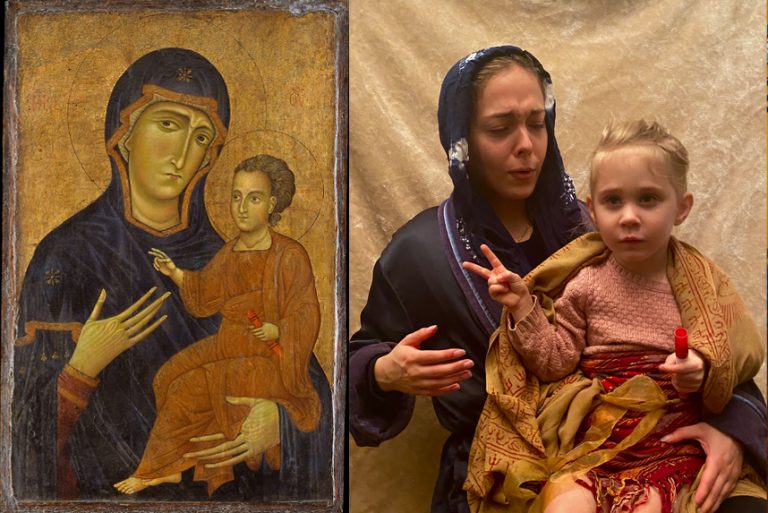 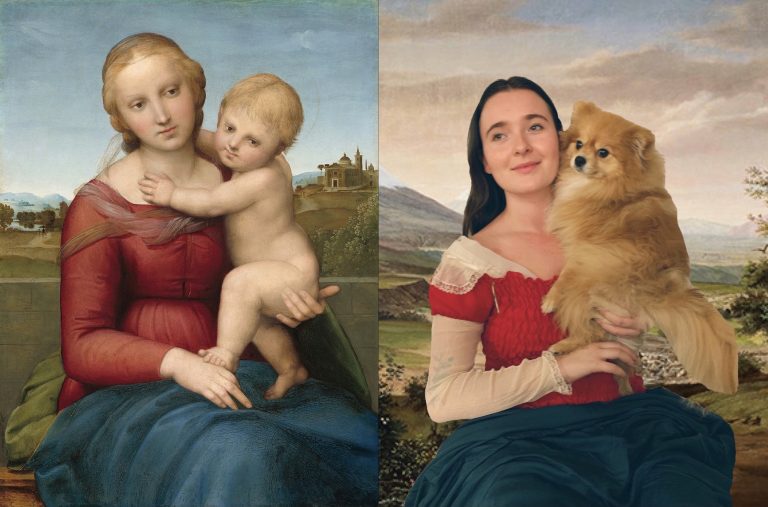 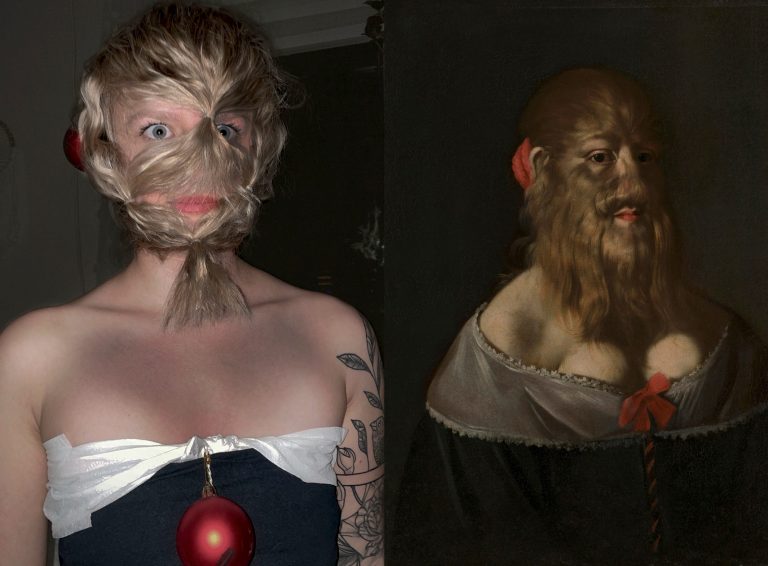 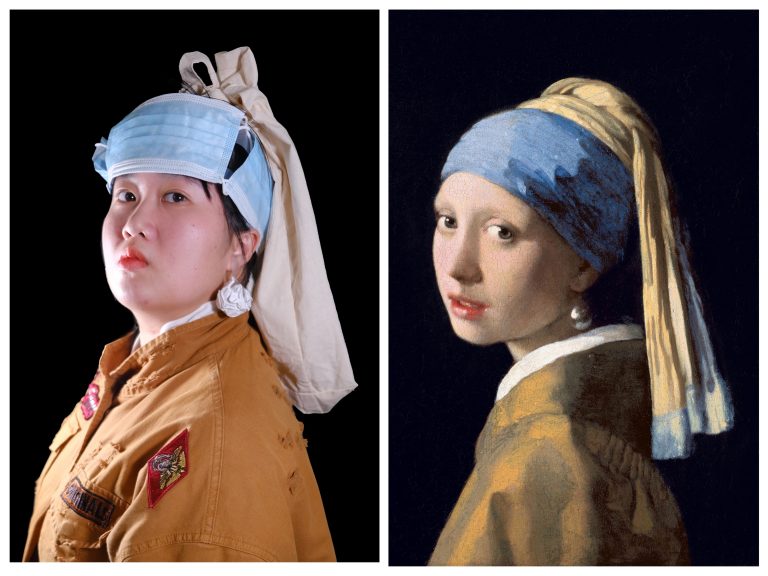 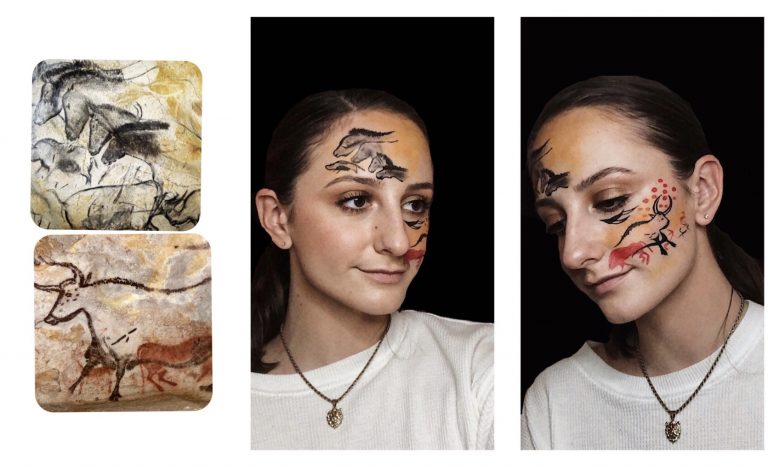 Posted in Our Students