UBCO Professor recognized for contributions in the performing arts 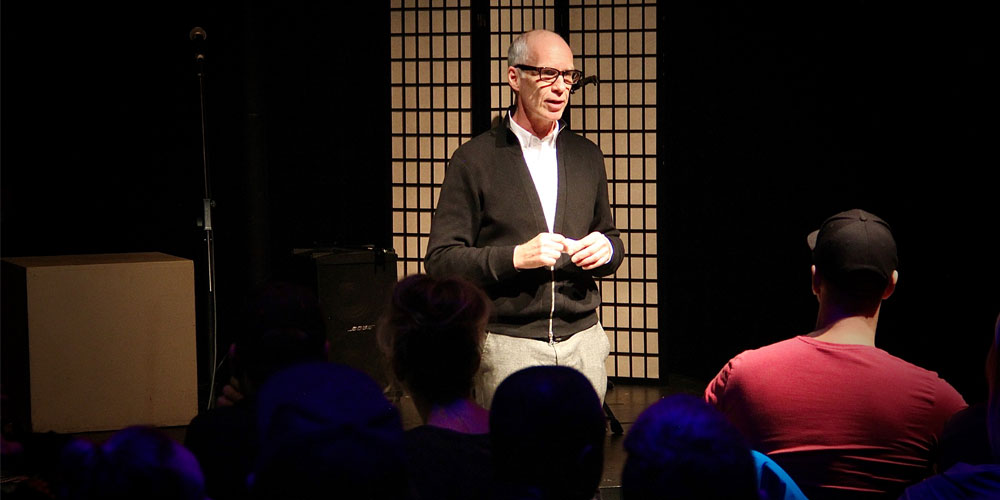 Neil Cadger is a performer, director and Associate Professor, who teaches performance creation in the Department of Creative Studies at UBC Okanagan. This spring, he was recognized for his contributions to the performing arts as a recipient of the Somerset Award for Performance Development in the Visual and Performing Arts.

“In my art practice as a creator and performer, I frequently source mythic narratives and seek a language which resonates at a non-verbal level.”

As the curator and Artistic Director of the Living Things International Arts Festival, he explores the diverse genres of live performance: the theatre world and its use of theatrical objects, the languages inherent to the dance world, the conceptual potential of performance art, music or sound as an active agent, and of course digital technology and how we live with it.

Of the nomination, Guy Cools from the University of Ghent says: “I fully support the nomination of Neil Cadger for this award for his outstanding career as a performer and creator, and for his excellence as an educator and more specifically for his successful curating of the Living Things international Arts Festival, which is an exemplary role model for how artistic practice, vision and community building can support each other.”

Neil graduated from l’école Jacques Lecoq in Paris, France in 1984. He founded Wissel Theatre in Gent, Belgium in 1984 and created theatre performances which toured extensively in Europe; he then worked as an independent artist with various dance and theatre companies until beginning his university career at the University of Saskatchewan in 2000. In 2010, he co-founded Inner Fish Performance Company with Denise Kenney to provide an infrastructure for producing and touring devised performances.  In 2017 he founded the Living Things International Arts Festival which presents local, regional, national and international performances.

“In our current climate of social unrest, mired with uncertain economic forecasts, it is more important than ever that art and creative living be accessible to all – Neil’s contributions are forwarding that possibility.” Says Peter Balkwill, a theatre artist ( Old Trout Puppet Workshop) and Assistant Professor of Acting and Drama in the School of Creative and Performing Arts at the University of Calgary.

“ I am most excited about the uplifting moments of public art that remind us of our common humanity with all its beauty and tragedy.”

Cadger notes that his teaching changed ‘dramatically’ with online course delivery. “In these pandemic days I have been teaching classical dramaturgy for proscenium theatres through the use of toy theatres.”

He explains that the rules remain functionally the same; stage left/right, up/down, stage areas, timing, the use of illusion. Each student built their own cardboard theatre and used a laptop, and the results were interesting, including a charming, naïve use of scale. This shift in course delivery offered the opportunity to examine how stories are composed and importantly, which story to choose.

“Given that live theatre online cannot physically unite the audience, one of the primary components of the theatre transformation – the ‘us’ or ‘we’ who respond as a physical group in different ways – is impossible.” He says. “This introduces the potential for failure as a unifying condition.  We cannot be a real audience but we can laugh at attempts to convince us that we are.”

In this context he explored European theatre clown which is grounded in human frailty and ultimately in failure – despite our attempts to the contrary, we die. He says the results were interesting, and will contribute to his teaching when we are back in the studio.