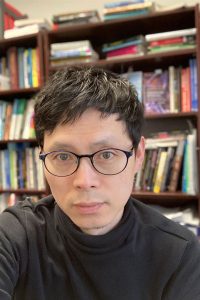 Kyong Yoon was announced as a Tier 1 Principal’s Research Chair for UBC Okanagan in the summer of 2022. In this role, Yoon will work to strengthen research in Trans-Pacific Digital Platform Studies. Already a leading figure in Asian media research, this award will allow Professor Yoon to advance the research on trans-Pacific digital platforms that are increasingly reshaping cultural production and consumption.

This 5-year research project will comprehensively examine the emerging process of platform-oriented media practices, known as platformization, in trans-Pacific contexts.

“Platformization refers to a process in which media production, circulation, and consumption are reshaped around major digital platforms, such as Netflix and YouTube” Yoon says.

Through this research project, Yoon will investigate these platforms, the media texts they enable, and audience engagement with platforms.

Yoon explains that global platforms have enabled the unexpected international success of recent non-Western media texts that would otherwise have not been disseminated globally. For example, the Korean-made Netflix series Squid Game and its global popularity illustrate the ways in which Asian media production is integrated with the global platform-driven economy. The show’s production has benefitted from Netflix’s catalog-building strategies through which content produced in various geo-cultural contexts, especially in non-Western countries, is licensed so that the streaming platform rapidly expands its global viewership.

As such, Netflix distinguishes itself from traditional legacy media, such as network TV, that have introduced a limited amount of foreign content. Dominant streaming services, exemplified by Netflix, have appropriated the high production value of certain local talent and creativity, while enabling audiences to access transnational texts through prompt availability of multiple versions of translated subtitles and dubbing.

With the PRC award, Yoon will extend his expertise to explore the emerging field of digital platform studies and move beyond the dominant Western-centric discourses about digital media.

“My goal for this work is to contribute to opening up new areas of digital research and enhance the interdisciplinary research capacities of UBC Okanagan,” he says.