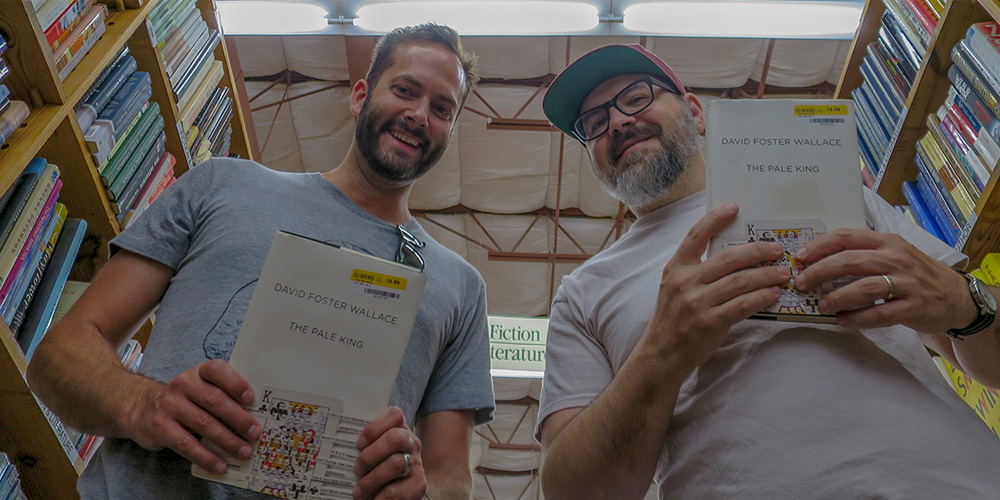 Dave Laird received an MA in English from UBCO in 2016, with a thesis on David Foster Wallace’s Infinite Jest. Dave was co-supervised by Dr. Daniel Keyes and Dr. Paul Milton, with committee member Dr. George Grinnell. His thesis titled, “Saying God with a Straight Face”: Towards an Understanding of Christian Soteriology in David Foster Wallace’s Infinite Jest, looks at the theological resonances throughout Wallace’s 1996 doorstop novel Infinite Jest, as they relate to Christian doctrine and character redemption arcs, noting salvation states in the protagonists Hal Incandenza, Don Gately, and Mario Incandenza.

Dave says about the thesis:

This dialogue is considered through the lens of postmodernism and the New Sincerity movement in contemporary U.S. fiction, and offers that the novel urges readers to consider what it means to be human between the tensions of sin and salvation, reinvigorating a traditional understanding of grace and redemption in a modern context. The essay discovers that Jest is a highly soteriological novel, greatly attuned to salvation states reflected in the New Testament, particularly in the Pauline epistles.

We asked Dave to discuss his experience at UBCO as a master’s student.

Tell us about the road to earning your UBC degree.

After having been a high school classroom teacher, I felt it was time to go back to school. I’d had a burning desire to do something big on Infinite Jest since completing it in early 2008. Living in Kelowna at the time, UBCO’s proximity allowed me to avoid uprooting my life and family, and I’d had two wonderful English profs in my undergrad, Paul Milton and Dan Keyes, who were instrumental in my falling in love with contemporary U.S. fiction, so I knew I wanted to work with them for my MA.

Major challenges during my MA were finding a balance between coursework, thesis writing, podcasting, part-time online high school teaching, first-year English TA’ing for three semesters, living in Tel Aviv for six months, and being reminded of my overwhelming capacity for procrastination when it comes to academic writing.

What are the highlights of your UBC experience?

Highlights of the experience were working with my three great supervisors, and doing directed studies courses tuned to my interests in contemporary U.S. fiction. One course I took was on DIY Hardcore and Punk Subcultures, with George Grinnell, and that was one of the coolest courses I’ve ever taken.

TA’ing was fantastic as well. I also attended three academic conferences on Wallace during my MA. The connections I made from those conferences have resulted in some of the best friendships and led to the podcast, so I’m thankful for all the outworkings of my MA degree.

Tell us more about your podcast, Concavity Show.

I met my co-host, Matt Bucher at a Wallace conference in 2015, and having complained to my wife Rachel about how there wasn’t a specific podcast dedicated to DFW, she said, “Well why don’t you start one?” Matt and I’d randomly bumped into each other in O’Hare Airport on the way home after the conference, and I thought to reach out to him about doing a show, and he agreed.

After 5 and a half years of talking pretty exclusively about Wallace, we did a soft reset in 2021, changing the name to Concavity Show, and have been focusing more on contemporary fiction. As a result of the show, I’ve been interviewed by several literary podcasts and media outlets, had a blurb about Infinite Jest in The New York Times, was asked to be a weekly guide for an online community read of Jest in 2016 called “Infinite Winter,” was commissioned by Academia.edu to make an instructional video series on how to make an academic podcast, and have received dozens of free books from publishers and listeners, so that’s all been amazing.

What advice would you give to current or future graduate students?

My advice would be to find a laser-focused area of interest that you’re obsessed with to do your thesis project on and find supervisors who are with it regarding your topic. You’re going to be spending hundreds and hundreds of hours of research and writing on your topic, so make sure you’re incredibly interested and compelled by it. I’d also say that you should prepare to be intellectually humbled, both by your peers and profs. There’s no better way to realize how little you know than by doing grad school.

He has two published essays in volumes of Wallace scholarship, and is a founding board member of the International David Foster Wallace Society. In 2015 he started a podcast on Wallace with Matt Bucher, in which they interviewed a host of Wallace enthusiasts on a range of topics.  He is also the co-host of Concavity Show, a literary podcast about contemporary fiction and the world of books, and a senior-high humanities teacher in the Saanich School District on Vancouver Island. He is a highly-ranked competitive Android: Netrunner player, and a video game, board game, music, film, television, and Sweden enthusiast.

Posted in Our Students