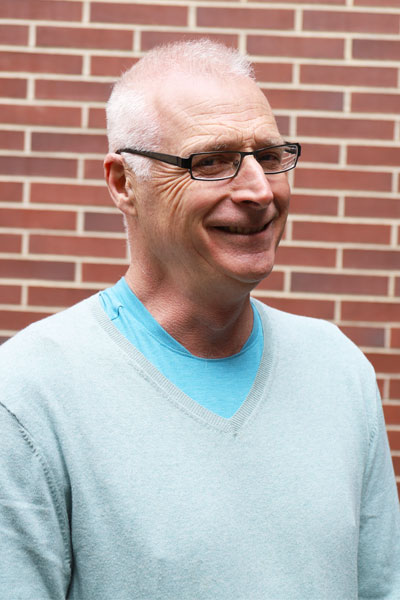 English and Cultural Studies with emphasis on film and television studies

His doctoral research focused on how testimonial performance inflected itself in 1990s daytime talkshow on American and Canadian television. His current research focus on 1. place studies with a focus on the Okanagan as occupied settler space, 2. archival media studies relating to digital ephemerality.

Much of Dr. Keyes teaching focuses on the analysis of visual culture. In most of his courses, he offers students choices in assignments that blend creative and critical approaches that aims to have students grasp and appreciate complexity.

“Fubar II: Just Give’r Again and the Limits of White Privilege in the Oil/Tar Sands. Energy in Literature: Essays on Energy and Its Social and Environmental Implications in Twentieth and Twenty-First Century Literary Texts. Edited by Paula Farca, TrueHeart Press, 2015. pp. 145-160.

“The Television Screen as Literature”. From Text to Txting [sic]: New Media in the Classroom. Edited by Paul Budra and Clint Burnham. Indiana, 2012, pp. 69-96.

Review of The Off-Screen: An Investigation of the Cinematic Frame by Eyal Peretz.  Canadian Review of Comparative Literature. vol. 46, no 4, 2019,

Review of Digital Humanities: Knowledge and Critique in a Digital Age by David M. Berry and Anders Fagerjord. PsycCRITIQUES, vol. 62, no. 50, article 16. (18 December 2017).

I will offer Cultural Studies 101 in Fall 2022 [section 02] and Spring 2022 [section 102]. This course aims to introduce you to Cultural Studies theories and methods by exploring how theory resonates with your lived experiences and identity. I hope this course provides a space for us to collectively contemplate how cultural and social norms shift over time contemplating differences like class, race, nation, abilities, age, gender and sexuality. This course fulfills the critical thinking requirement of the Bachelor Arts degree.

This course blends creative and critical making focussing on “television” as this flexible term that 30 years ago referred to a static box in most middle-class living rooms. Today television can refer to not just a box but a complex set of possibilities and practices. This course studies how broadcast regimes whether regular linear broadcasters like CBC and CTV in Canada or streaming video broadcaster like YouTube, Netflix, Amazon Prime, Disney Plus, etc.  shape and are shaped by genre, viewers’ habits, regulators, transglobal economics, and the affordances of media platforms. You will write and post autoethnographic [a.k.a. short essays] reflecting on your experiences with screen culture and the readings in the course that will be shared with the class and form much of the course’s exploratory learning. Additionally, this course has a substantive team assignment where you working with three or four other students will produce a 30-second public broadcast announcement for the folks at the mental health students support office called Thrive. Students will pitch, storyboard, shoot, edit, broadcast this content, and reflect on the process of being a maker/broadcaster. This production will involve hands on training provided by UBC O Studios.