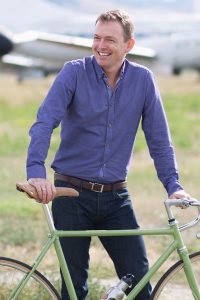 Greg Garrard is an English-sounding Canadian who lived in the Netherlands, Lebanon, England and Wales before coming to Kelowna in 2013. He is the Associate Dean of Research and Graduate Studies in the Faculty of Creative and Critical Studies, and a Professor teaching courses in English and Sustainability.

Greg shared some insights on his teaching and research practices here at UBC Okanagan.

Tell us about your research interests.

In the broadest sense, I’m interested in cultures of nature: literary representations of wilderness, of animals, of wildfire, of climate change, and so on. But I also want to understand how those representations affect the things they represent. So, for example, Herman Melville’s Moby-Dick embodies many of the ideas about whales and whaling that vindicated that industry at the time – that whale populations could sustain any amount of whaling, that whales didn’t feel pain. It also put some strange and discomforting ideas back into that cultural context – that the pursuit of whales could be seen as, itself, unhinged, and that there might be some unsuspected – at that time – kinship between humans and whales. Much later, in the 1960s and 70s, a huge cultural change in the West turned whaling from a major industry into a pariah profession, which in turn allowed some whale populations to rebound.

What kind of learning experiences do you offer your students?

Until COVID-19 came along, most of my teaching took place in classrooms. However, I’ve always been enthusiastic about outdoor education and place-based learning. When was a professor in the UK, I took students to the landscapes associated with Thomas Hardy, John Clare and the Bronte sisters. In Canada, I taught ‘In Pursuit of the Whale’, examining literature about cetaceans, at Bamfield Marine Sciences Centre on Vancouver Island, and I’ve also taught ‘Writing the Okanagan’ in Kelowna, a course that examines regional literature in relation to the Kelownafornia myth. I’ve found that there’s something uniquely inspiring about teaching students outside a familiar environment, especially when they’re reading books that are deeply invested in specific places.

You supervise in the MA in English program. What opportunities do you offer for graduate students?

‘Place’ doesn’t map onto ‘environment’, exactly – the latter typically implies a scientific bias in terms of what belongs and what matters, whereas the former is more of a hodge-podge of geography, cultural representation and subjective value – but they do overlap in important ways. ‘Writing the Okanagan’ is a place-based course that seeks to enable students to perceive connections between the bioregion they inhabit – the Okanagan-Similkameen watershed, essentially – and the vastness of the global biosphere, where the familiar (and depressing) ‘global environmental crisis’ is understood to be happening. Through this kind of learning experience, I hope the Literature and Place-themed MA in English can help students appreciate the contemporary relevance and significance of literary study, whilst also providing a more manageable, less overwhelming context for their environmental interests and concerns.

You recently received a SSHRC Insight grant for a project titled, ‘Kelownafornia’. Tell us about that project.

‘Kelownafornia’ is (in addition to being a really terrible rap video) shorthand for the settler colonial idyll of the Canadian Okanagan. The research team, drawn from four faculties of UBC Okanagan, will look at four themes: literary and artistic representations of the Okanagan north and south of the 49th parallel; the role of the tourist economy in constructing the idyllic view; the history of petroculture in the Valley, including the dominant feature of its human geography, highway 97; the long-running dispute over the South Okanagan-Similkameen National Park; and the landscape aesthetics of different demographic groups in the Okanagan.

Environmental issues are usually understood as scientific and technical, but they can seldom be resolved in these terms alone. For example, the scientific aspects of climate change are pretty well understood, and yet this has not yielded the kind of concerted political and social response that scientists might have hoped for. The Okanagan Valley is experiencing immense pressure from property development and agriculture, and this will only intensify as the population grows and the climate warms over the coming decades. The Kelownafornia project aims to improve citizens’ understanding of where they live, and to highlight the gap between the idyll and the biological and climatic reality. We hope that’ll increase support for measures to enhance the environmental sustainability of Valley communities in the future.

Greg is an English-sounding Canadian who lived in the Netherlands, Lebanon, England and Wales before coming to Kelowna in 2013. While working at Bath Spa University in the west of England, he was a Senior Teaching Fellow in the Artswork Publishing Lab and later a Reader in environmental literature. He served as Chair of the Association for the Study of Literature and the Environment (UK and Ireland) 2004-2010 and as managing editor, later co-editor, of Green Letters: Studies in Ecocriticism 2008-2015.