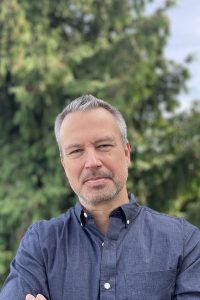 Dr. Vickery joined UBCO in 2006 as a sessional instructor, and is now a full time Lecturer in the Department of English and Cultural studies. He is currently teaching first-year courses in literary genre, second year courses in historical literature, and a popular literature course in science fiction.

Dr. Vickery shared some insights on his research and teaching practices here at UBC Okanagan.

What brought you to UBCO?

My wife and I were living in downtown Toronto when we felt a strong tug to exchange the big city for big mountain views. Once I had completed the residency for my doctoral program at the University of Toronto, we moved to Kelowna where I wrote my dissertation while working as a sessional instructor (starting in 2006) at the newly minted UBC Okanagan. It was an important move for us and one that we’ve never regretted. Being part of UBCO since its early days, watching it grow and develop, has been a rich experience and I’m excited for good things to come.

Tell us about your research interests.

My research focuses on religious text in sixteenth and seventeenth century England, a period when Europe changed profoundly through the seismic activity of multiple reformations, both Protestant and Roman Catholic. These religious renewal movements affected society at every level and the literature of the period reflects the deep spirituality and the theological energies of the time. My own research looks to the complex phenomenon of English Puritanism which had a profound influence on such momentous literary figures as John Milton and John Bunyan. My writing considers Puritanism as an intellectual movement, looking to its sources and demonstrating, among other things, its dependence upon the philosophical wealth of medieval scholasticism. While some influential studies have characterized the Puritans as largely distrustful of and hostile to the larger Catholic tradition, I seek to situate some notable Puritan writers in a more intellectually generous and ecumenical stream.

How did you know you wanted to be a professor?

Not long before entering my BA program, I purchased a volume by the Oxford scholar, CS Lewis: his Preface to Paradise Lost. At the time, I was out of my depth, but Lewis’ influence upon me was and continues to be incalculable. When I entered the university as an undergraduate, I knew that I wanted, in some small way at least, to be like this Oxford writer. Happily, my first English professor turned out to be an admirer of Lewis as well, which mutual appreciation has been profoundly formative in its own way.

In the fourth year of my undergrad, I presented a paper to my fellow students on Hamlet and the Kierkegaardian concept of dread. The next day my Shakespeare professor stopped me in the hall and strongly recommended that I dedicate my life to this kind of teaching. It was a striking moment, and it underscores for me the significance of a professor’s influence outside the classroom. I’ve carried her words (and Kierkegaard’s concept) with me ever since.

What is your own process in writing?

I’ve learned over time to expect relatively little from myself in my first draft. It took a wise professor to persuade me that my first draft will usually be poor indeed (he used a scatological term) and that it’s the editorial process that transforms base elements into richer metals. Without the pressure of creating a brilliant first draft, writing is a much more enjoyable and far more fruitful enterprise. Martin Luther in the sixteenth century famously encouraged his readers to “sin boldly.” He has since been widely misunderstood, but, if I might apply his dictum in a literary direction, I think it’s good advice for the writer. Sin boldly in the draft. Get it out, with all its faults and defects. Editing takes what is weak and makes it strong.