All artists talks are free and open to all. This series is presented in partnership with the UBC Okanagan Gallery.

Our 2022/23 Visiting Artist Series will be a mix of in-person and online, held in various locations. See below for details on each artist. 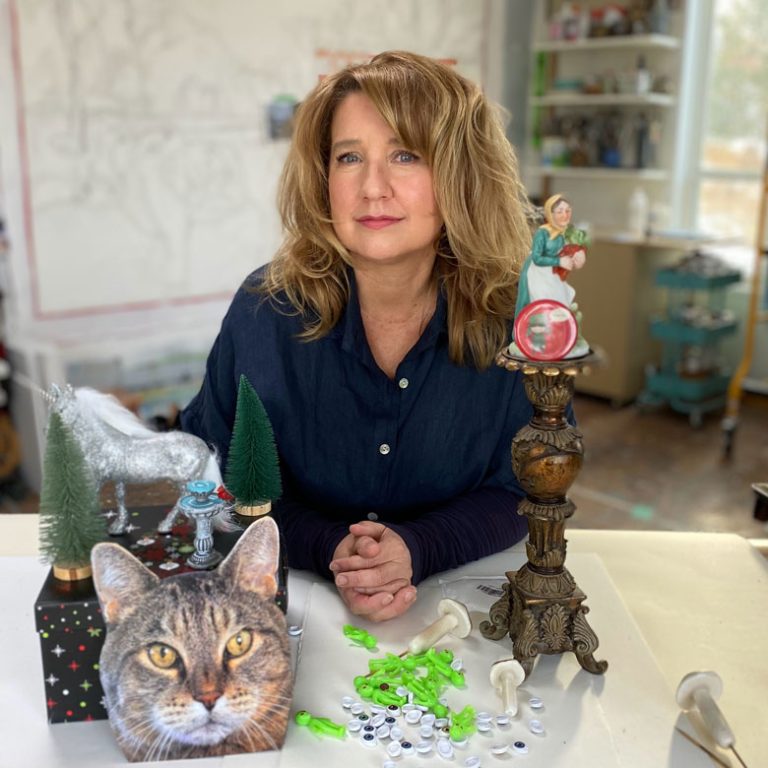 Join artist/curator Wanda Lock at the Lake Country Art Gallery for an afternoon of conversation about art, living in the Okanagan, day jobs, cautionary tales and advice, plus a tour of the current exhibition, State(s) of Being.

Wanda Lock was born in Oliver, BC and grew up in Oyama, BC. She began her artistic training at Okanagan University College in Kelowna, then switched to the Emily Carr College of Art and Design in Vancouver, where she graduated in 1992. Since then, she has lived and worked in Lake Country, BC.

Lock’s practice is based in painting and expands into drawing, collage, and installation. Her works often plays with themes of domesticity, nostalgia, and banality. She also has a curatorial practice and has been working as the curator of the Lake Country Art Gallery since 2015.

Presented in partnership with the Lake Country Art Gallery. 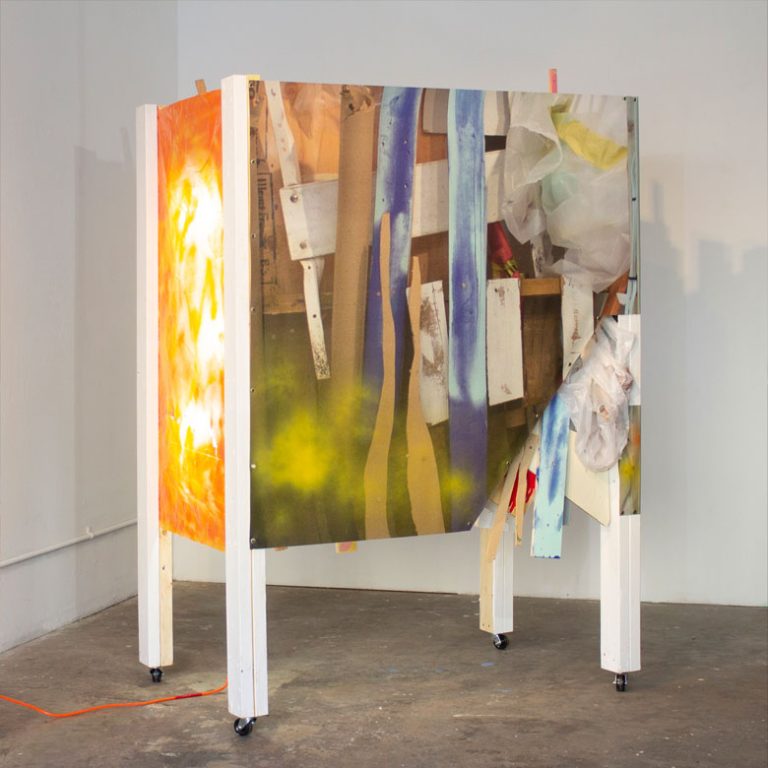 Exhibiting a unique collection of image-based sculptural objects and installations, Austin Clay Willis’s Moving Through Debris opens this winter at the Alternator Centre for Contemporary Art.

The works are inspired by temporary construction, DIY structures, childish forts, East Vancouver alleyways littered with broken cabinets and forgotten bed frames, industrial dumpsters filled with debris from construction sites, and the sorting bins at city recycling dumps. The installation deals with ideas of industrial and personal waste through the collection, recycling, and upcycling of common industrial material. The incorporation of these concepts becomes a source for reimagining and recontextualizing derelict and deteriorating debris. By referencing the processes of building and (inevitably of decaying), the use of found, reclaimed, and recycled material gives opportunity for new life to perhaps forgotten objects.

Presented in partnership with the Alternator Centre for Contemporary Art 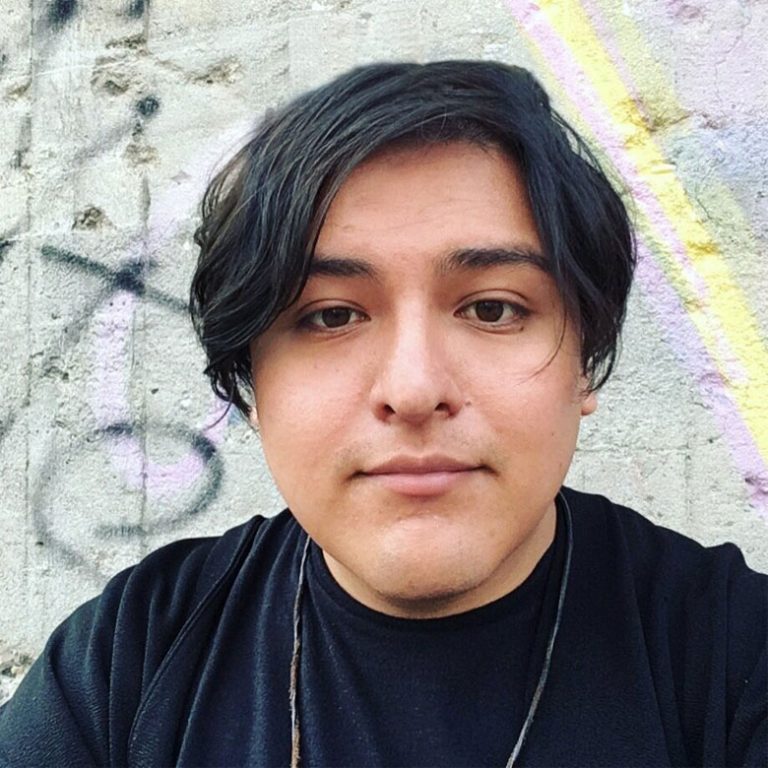 Join artist, researcher and curator, Hanss Lujan Torres for a discussion about curating “Time As Relative” at the Alternator Centre for Contemporary Art.

Hanss Lujan Torres is an artist, researcher and curator from Cusco, Peru, working between the unceded territories of the Syilx/Okanagan Nation and Tiohtià:ke/Mooniyang/Montréal. He holds a Bachelor of Fine Arts with a minor in Art History and Visual Culture from the University of British Columbia Okanagan (2012) and is currently working to complete an MA in Art History at Concordia University.

His research and curatorial practice consider subjugated archives, queer temporalities, and alternative futures in contemporary art. Hanss is the research coordinator for the Indigenous Futures Research Centre. In addition, he has worked with several arts organizations in British Columbia, including Oxygen Art Centre, the Lake Country Art Gallery, Two Rivers Gallery, the Alternator Centre for Contemporary Art, and the Kelowna Art Gallery. 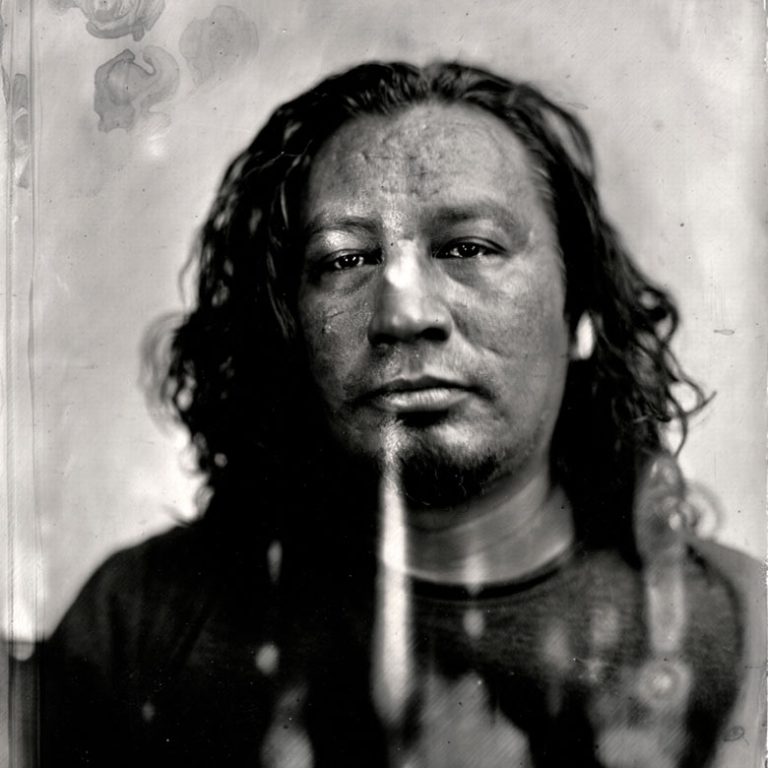 Terrance Houle (Niitsitapi/ Saulteaux) is an internationally recognized interdisciplinary media artist and a member of the Kainai Nation/ Blood Tribe. Involved with Aboriginal communities all his life, he has travelled to reservations throughout North America participating in Powwow dancing along with his native ceremonies.

His work ranges from subversive to humorous absurdity to solemn and poetic artistic expressions. His work often relates to the physical body as it investigates issues of history, colonization, Aboriginal identity and representation in popular culture, as well as conceptual ideas based on memory, home, and reserve communities. Houle works in whatever media strikes him, and has produced work in photography, painting, installation, mass marketing, performance, music, video, and film. Houle’s work has been exhibited across Canada, the United States, Australia, the UK and Europe. Since 2014, Houle has been working on an ongoing collaborative project titled GHOST DAYS. GHOST DAYS evokes colonial and non-colonial histories that exist in the light of night as in the darkness of the day, and awakens a collaboration with artists, audience, and spirit. Currently, He has co-directed a short animation Otanimm/Onnimm with his daughter Neko Wong-Houle which is currently touring Film festivals, In Los Angeles, NYC, Toronto, New Zealand, Vancouver, Oxford & many more. Recently their short film won the prestigious Golden Sheaf Indigenous Award at Yorkton Film Festival and is Neko’s First Award in Film at 17 years old. Houle is based in Calgary, Alberta. 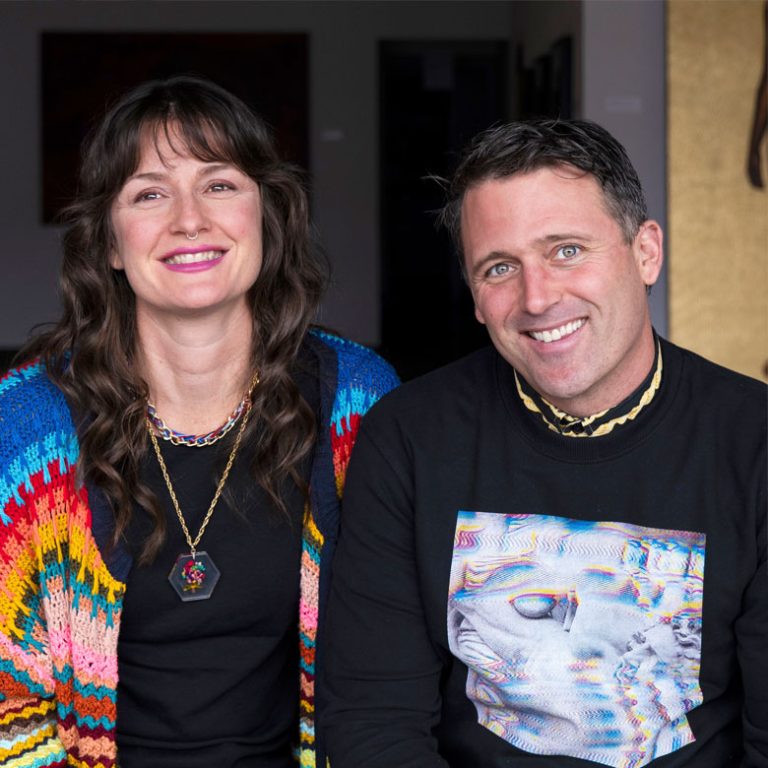 Each of the murals locations has been strategically selected creating a short walking tour within the Rutland Business Improvement Area.

David & Jorden Doody are interdisciplinary artists who examine the transitional spaces between tangible material and digital media. Jorden received her BFA and MFA from UBC Okanagan and continues to exhibit widely across Canada. David received his BFA from UBC and his MFA from Concordia University.

Jorden & David are currently Visual Arts instructors at UBC Okanagan. They are also the Artistic Directors of the Uptown Mural Project, an inclusive and educative urban art initiative held in Kelowna’s Rutland neighborhood. 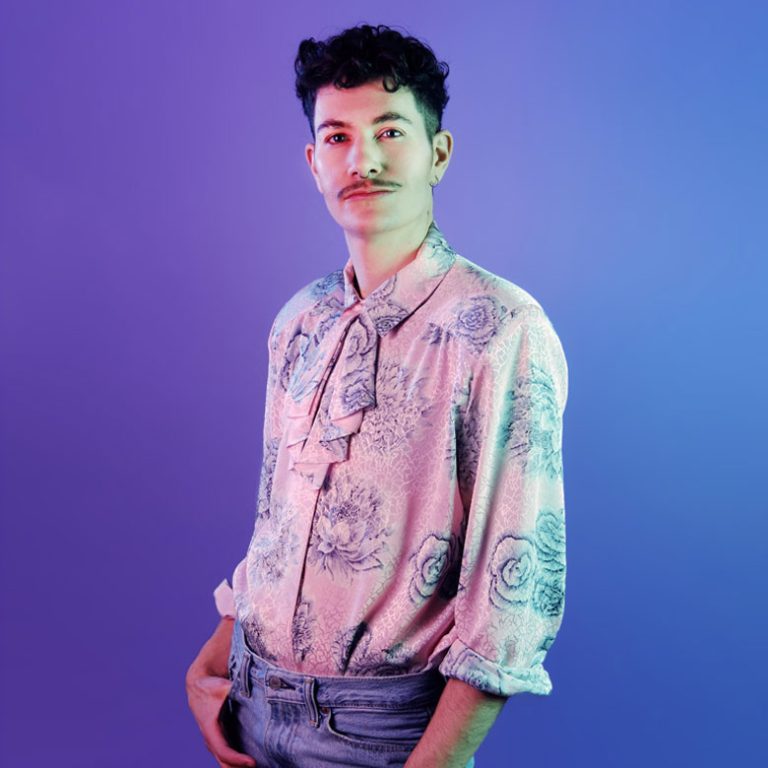 JJ Levine is an image-based artist living in Tiohti:áke/Montreal, known for his compelling body of work in portraiture. Represented by ELLEPHANT (Montreal), Levine’s artwork has been exhibited at museums and galleries internationally. A major retrospective of his work, JJ Levine: Queer Photographs, was recently on view at the McCord Museum (Montreal).

His images have been featured in such publications as Photography and Culture, CV Photo, Esse, Slate, The Guardian Observer, and Society. Levine holds an MFA in Photography from Concordia University. In 2015, he self-published two artist books: Queer Portraits: 2006-2015 and Switch. Levine’s art practice balances a queer ethos with a strong formal aesthetic. 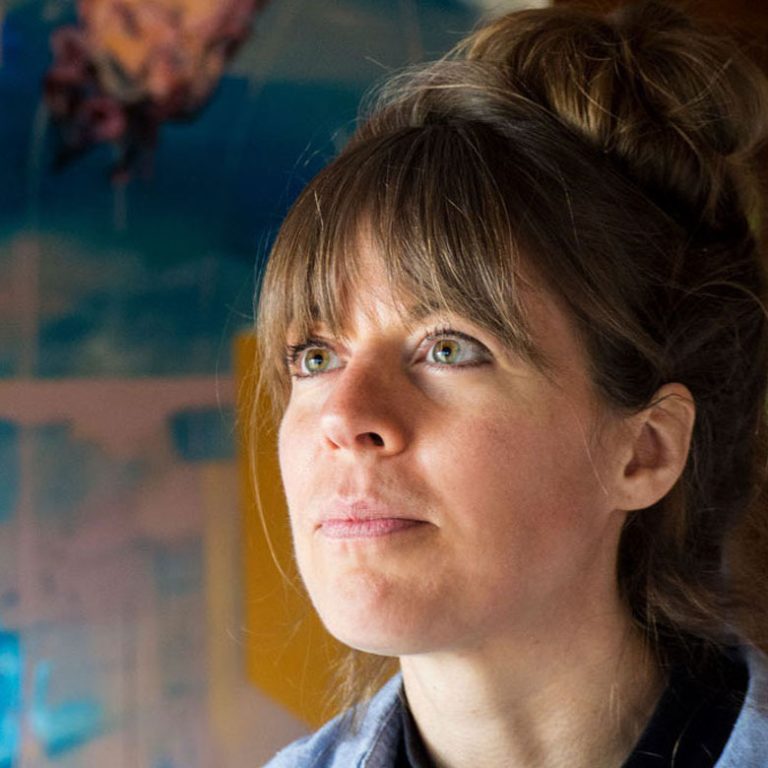 Lindsay Kirker’s paintings take their cue from the rapid expansion of the urban landscape; surveying a curiosity and fascination with the built environment and a concern for the nature that surrounds us. By utilizing the tools of perspective Kirker reflects on our relationship with nature.

Drawing on reoccurring themes of love, loss, demolition and rebuilding, the construction in her paintings stand as a metaphor to explore the spectrum of human experience, confronting the ideas and structures we put in place in order to protect ourselves from uncertainty. The paintings themselves are a search for stability. As an emerging artist, solo exhibitions include – This is a Love Story in 2021 at The Alternator Centre for Contemporary Art and in 2022, This is Water at The Vernon Public Art Gallery. In 2022, she participated in the La Napoule Canadian Artist Residency in La Napoule, France, and in 2023 will be an artist in residence at The Boathouse outside of Ahmedabad, Gujarat, India. A graduate of The University of British Columbia Okanagan and recipient of the 2019 Audain Foundation Travel Award and Joseph-Armand Bombardier Canada Graduate Master’s Award, she is presently settled on the traditional territory of the Syilx/Okanagan Peoples in British Columbia, Canada.

Julian Yi-Zhong Hou (b. 1980) is a multidisciplinary artist that currently resides in Vernon, on the unceded land of the Syilx peoples of the Okanagan Nation. His work centres around contemporary mystical themes including consciousness, divination, and symbology.

Christine Howard Sandoval is an interdisciplinary artist who lives and works in the unceded territories of the Squamish, Tsleil-Waututh, and Musqueam First Nations and is an Assistant Professor of Interdisciplinary Praxis in the Audain Faculty of Art at Emily Carr University (Vancouver, BC).

Amy Fung, Divya Mehra, Kim Ngugen, Asian Brain Trust was founded in 2014 by Amy Fung (Scorpio), Divya Mehra (Scorpio), and Kim Nguyen (Cancer) as an arts research collective. Together they have lectured and presented in international conferences on the topics of race, power, violence, and performance in contemporary visual arts.

Lisa Myers (Beausoleil First Nation, born in Oakville, ON, Canada; lives in Port Severn and Toronto, ON, Canada) is an independent curator and artist with a keen interest in interdisciplinary collaboration.

Natalie Ball, “I make art as proposals of refusal to complicate an easily affirmed and consumed narrative and identity without absolutes.”

Krista Belle Stewart, who works with video, land, performance, photography, textiles, and sound, drawing out personal and political narratives inherent in archival materials while questioning their articulation in institutional histories.

Derya Akay, who approaches everyday objects, materials and experiences as rich sites of knowledge and meaning.

Brenda Draney, who’s work visually represents the moment when vulnerability is exposed, while encouraging the viewer to reject the notion to dominate the void where horror, poignancy, or powerful moments exist.

Tsema Igharas is an interdisciplinary artist and a member of the Tahltan First Nation. She uses Potlatch methodology to create conceptual artwork and teachings influenced by her mentorship in Northwest Coast Formline Design at K’saan (2005/06), her studies in visual culture and time in the mountains.

Mia Feuer is an interdisciplinary sculptor born in Winnipeg, Manitoba. She received her MFA from the Department of Sculpture + Extended Media at Virginia Commonwealth University.

Ian Johnston’s current work Fine Line has switched attention from consumer culture to the obsessive-compulsive behavior that appear to epitomize it.

Patrik Andersson, Associate Professor in Critical + Cultural Studies. He teaches contemporary art and ideas which are informed by his freelance activities as an art critic and curator with interests ranging from conceptual art to design disciplines.

Liz Magor, one of Canada’s most important contemporary sculptors.

Myfanwy MacLeod, who’s work is trademarked by her wry sense of humour, and her layered referencing of consumer and popular culture..

Maikoiyo Alley-Barnes, artist, filmmaker, writer, and designer who explores the resonance of genetic cultural memory through the mystical and the mundane.

Paul Wong, a media-maestro making art for site-specific spaces and screens of all sizes.

James Nizam, who’s art practice investigates photography within an expanded field of operations that consider the relationship between performance, sculpture, and architecture.

Jennifer Stillwell who primarily works with sculpture and installation.

David Kang, who’s work plays with languages – visual, written, and spoken to seek out moments of miscegenation and mistranslation

Adam Kuby, who’s work engages the built and natural worlds to foster a sense of connectedness in our increasingly fractured environments.

Elizabeth McIntosh’s work reveals itself through the multiplicity of visual interpretations and understandings, shying away from aesthetic resolution.

Sarah  Burwash, who works in narrative drawing, watercolor, and illustrational drawing, she is also active in video, animation, ‘zines and artist book works.